OMG, what the hell ya? I’ve just search about Super Junior and suddenly I found that post “Hankyung at Soekarno-Hatta International Airport”

This is my story when I was stalking Hangeng at Soekarno-Hatta Airport
Well…actually I went to the airport by myself cause all my friends who said want to join me, they canceled to come…so…I went after I finished teaching…I arrived at the airport too early, about 1.30pm, meanwhile flight from Beijing landed about 3.30pm. So I was waiting for him patiently… With my clothes formal (skirt and vest) I didn’t look like a person who wanted to stalking…Even some people ask me what plane I rode..i just answered: “I’m picking up my friend from Beijing”. Even an ahjumma asked me:”Beijing?Is it your boyfriend?”…I was just like:”eerrr..i hope he is ma’am…”
It was almost 3.30pm.. and you guys know??the crews and the securities who will pick up Hangeng sat beside me!!i was just so lucky that I heard all they planned when Hangeng arrive…sooo…I just waited. And then the airplane arrived..all crews and that securities prepared in front of the gate. But suddenly some fans scream that they saw Hangeng out from another gate. I was just…ohh..nooo..this time I feel unlucky. But I was wondering, the crews and the securities where we stood, still didn’t move, so I decided to wait again. In a few minutes…I heard screaming from the inside..and I was…oohh..this is the time…I’ve decided to wait him right in front of the car who will pick him up.
Ohhh…finally he comes!!!!i just saw his black cap!!!and then..the fans begun so wild..screaming and pulling each other. Even Hangeng walked so slow because he was difficulte to move. And me, who saw that, I just became “statue” seeing his smile even he was in crowded by fans. My heart beated so fast then when he got closer to the car (and to me surely!)..He even couldn’t move because the crowded, and suddenly I’ve screamed…’”HEEYY!!!MOVE!!LET HIM PASS!!!”..and he reached the car..and me, I went to another side of the car. Calling him with another fans and he was just smile to us…so finally he left the airport and left me who smile all around…hahaha” 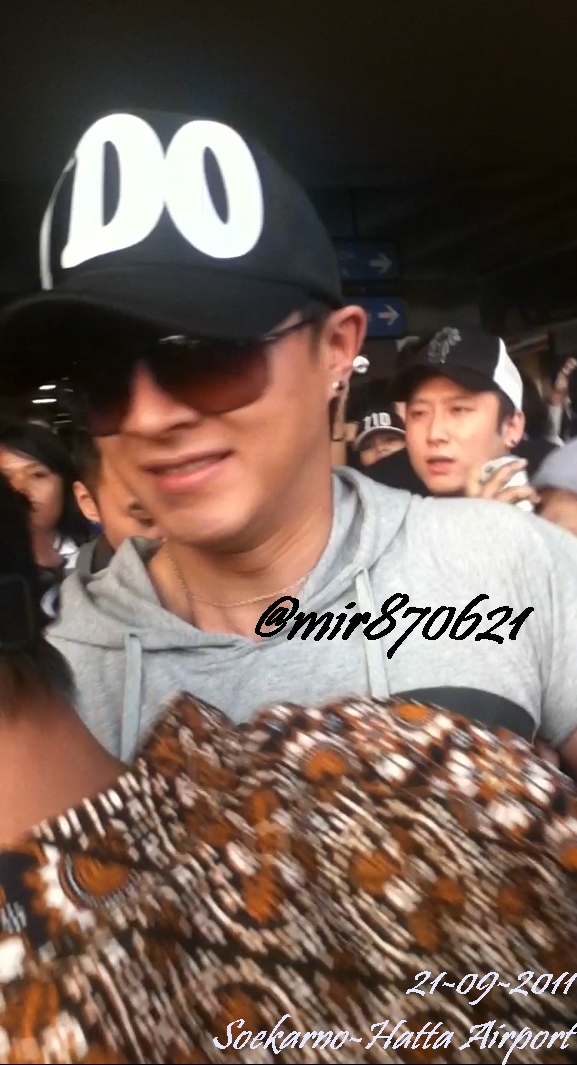